Cambridgeshire is famed for its stately homes and Elton Hall is a perfect example of this county’s architectural gems.  This stunning romantic, part-gothic historic house sits in the beautiful countryside of north western Cambridgeshire, in vast unspoilt parkland.

Home to the Proby family since 1660, this enchanting 12th Century house and its collection have been developed over the years, and many Old Masters and examples of fine English portraiture are contained within.  As well as the magnificent collection of art, which also includes works by renowned British artists, Gainsborough, Constable and Reynolds, the house holds many other treasures, including fine French furniture and an astounding private library.

Peter Proby bought a lease of the Manor of Elton in 1595, becoming the first member of the family to own land at Elton.  Acquiring further leases from Queen Elizabeth I in 1602, he later became the Lord Mayor of London in 1622, and was Knighted in 1623, the year before he died.  His Grandson, Sir Thomas Proby married a local heiress, Frances Cotton, and became a Baronet in 1662.  Together, Sir Thomas and Frances acquired the site and built Elton Hall, between 1665 and 1668.

The immaculate gardens at Elton Hall have been restored over the last forty years, by Meredyth Proby who has meticulously re-designed and re-planted them.  The original garden designs dating back to the 1670s, and their transformation through the 18th and 19th centuries are on display in the house, but the current gardens are based on a 1911 design by Sir Richard Proby’s father-in-law,  A.H. Hallam Murray.  Based on the Edwardian design of paths and lawns, flawlessly trimmed hedges divide the garden into different areas.  The Orangery sits in a bright and colourful Mediterranean garden, both of which were built to celebrate the millennium; the former Edwardian rose garden has become The Flower Garden (pictured) featuring a wisteria walk and a fountain by Giles Rayner; the sunken Lily Pond is decadently planted with small shrubs and perennials; and the Topiary and Shrub Garden showcase some incredible topiary and provide shelter from the sun in the height of summer.

Click here to find out more about Elton Hall and their re-opening this month.

A short twenty minute drive from Elton Hall is The Yard @ Pringle Farm, a collection of eight luxurious self catering barn conversions.  The perfect countryside getaway for couples, families or groups, Pringle Farm has a variety of accommodation types to suit all requirements.

Click here to find out about Pringle Farm’s luxurious barns, and make a weekend of your next visit to Elton Hall, Cambridgeshire. 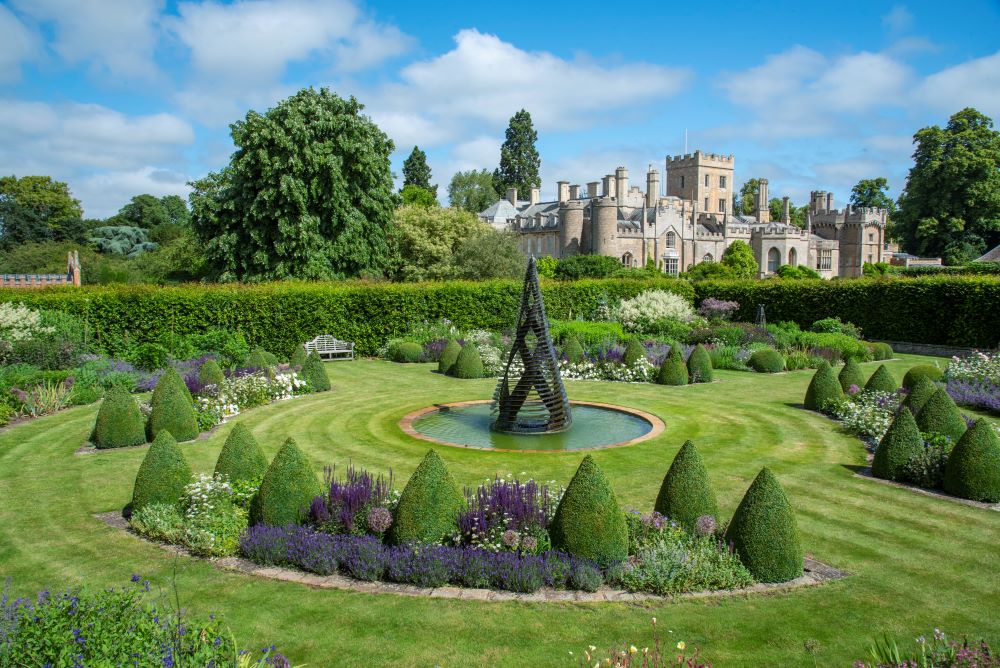